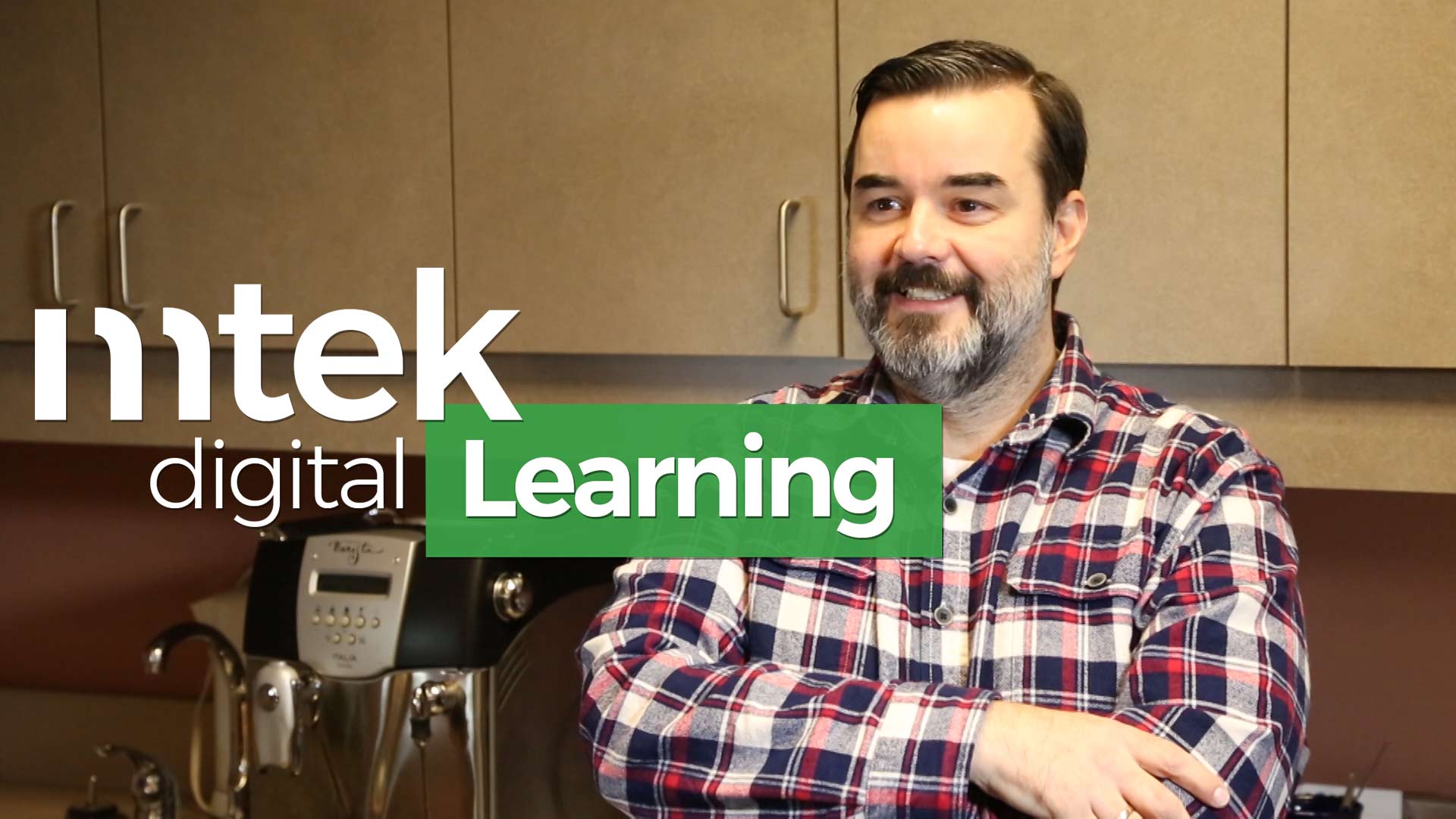 Chris has a number of software and hardware favourites and he shares his top tech and passion.

Chris: Hi. My name’s Chris Koehn. I am a former journalist and an Edmonton videographer.

What Technologies are Important to You?

Chris: Mostly, I spend my days in front of a laptop with Adobe Creative Suite, using anything from the layout to video editing to photo editing and that sort of stuff, so.

Interviewer: Great! And which apps do you like the best out of the Adobe Suite?

Chris: My favourite, to be honest, is InDesign. I love just designing books and even, I’ll just see a nice newspaper and I’ll copy the layout and just start filling it with, you know, lorem ipsum sit amet.

Chris: I find spending time poring over my photos in Lightroom and then, you know, going back and forth between Photoshop and that sort of thing is one of my favourite things. It consumes hours but it’s really interesting to just see what you took on camera, see how different it is as the camera recorded it, and then (some people do) I like to generally try to edit my photos to more represent what I think I saw or remember seeing at the scene, you know, so it isn’t necessarily as flat or maybe certain colours popped. I’ll spend hours doing that. Sometimes it leaves you stuck in the office and you wish you could shoot more, but, you know, when you nail that one photo and you see that and you go, “Wow, you know, I’m going to push this out to Instagram or something.”

Chris: Yeah. Oh, it’s really satisfying, especially when you can kind of highlight, like I said, to recreate that scene that I think I saw or that I recall.

Chris: You know, with digital tools you can do that a lot. I mean, I’ve dabbled in film back in the days and stuff like that and there was a heck of a lot that you had to do with film, and if you’re starting to do colour and things like that you’re trusting a lab, but here, it’s everything: It’s the capture; it’s the editing, and the whole process comes down to you. With everything on the Internet these days you can learn anything about it too. It’s so available to everybody. There is really no excuse for not taking up some kind of digital hobby these days or any hobby really.

Interviewer: Any other techs of interest?

Chris: Do we want to talk about what I had mentioned?

Chris: Because on learning and hobbies and things like that, there’s a lot of those how-tos and tutorials out there. You type in any subject and you will get any number of responses, anything from amateurs that are just putting out there what they’ve done there, to pros, everything. Invariably you’ll come up to a Lynda.com, you know, and you’ll click on it and it’s premium, but it’s great stuff. But it’s funny, because I’ve run into a lot of people and they don’t even know that you can get free Lynda.com access with your Edmonton Public Library card, so all you need to do is sign up for your card, get it enabled online, go to Lynda.com, and then it will direct you when you sign up to go to an institutional portal. You start punching in the EPL.ca and it will take you to a sign-in site that enables the full premium content for you. They have everything: They’ve got all the top experts in their fields talking about everything from even gear updates to marketing to learning any of the Adobe Creative Suite stuff – I’ve learned quite a bit of stuff off there actually. Even the courses on how to just organize your work flow a little better in Lightroom. So it’s a great tool that I don’t think anybody really realizes they have access to just through their free library card. Everybody I mention it to, like I said, is always blown away. And I was looking at it earlier, and Calgary, Victoria, and Vancouver, they all have access. Other libraries are coming online. It’s just something really interesting to be able to learn almost anything you want.

Chris: There are other, more expensive things you can get involved in, in lighting. Lighting panels. There are lighting wands, like the Ice; it’s this really cool Westcott product, you know, it’s a nice soft light—Ice light. All this LED stuff is coming out these days now. It’s really made lighting cheaper but you still have to pay the bit money for the high output, the colour CRI, you know, the colour correction and stuff like that, your temperatures and stuff. So, starting up with low budget stuff like that, it was nice to see these little Lume Cubes. And I think those were just Kickstarted sort of recently. A great idea, they’re just maybe almost two inches cubed, and very high output for these LEDs! They’re battery-powered. They charge USB. They’re waterproof—you know you just tighten up the seal on the back there for the USB connection—and they operate by your phone. So, you can place them however you like within range. You can even have them in water or take them on a surfboard. If you go to the Lume Cube site or whatever you see a lot of the content in photos people are shooting with it are just really amazing night surfing photos and stuff like that.

Interviewer: And I bet you can control it from your smart phone.

Chris: Yeah, exactly. So you can not only turn them on, but you can control the brightness. There’s, like, 10 levels of brightness I think. You can also turn it into a mini-strobe; it’ll sense whether your flash has gone off and add to the light. You can turn the whole bank on and off, have them all set up for everything for your scene, and at full power they are about 30 to 40 minutes and you just let them go. They add a whole new creative dimension, I think, to your photography, especially if you’re into any of that night photography and light painting. You can even mount them on drones. I’ve seen people paint scenes from multiple camera exposures that they blend, and in the end they just blend out the drone. But they’ll hover the drone over certain areas they want to highlight with light. They’re so light they’ll fit on your DGI, and they create just some fantastic photos that, you know, you wouldn’t necessarily think you could possibly make, but it’s amazing how people are using all these tools to just keep pushing these creative limits.

Stepping Off the Camera Mainstream

Chris: Yeah, actually, I was a Nikon shooter for years in my photojournalist career, and I loved it. I loved Nikon. I had a D2H and a D7000 in my huge bag. You know, one for wide, one for telephoto, all that sort of stuff. Loved it. Great files out of them, great performance, amazing glass, that sort of thing. I left journalism, and really found that I wasn’t using my cameras as much. I left Nikon for something a little smaller, more compact, and I went to the Olympus Micro Four Thirds (4/3) system. It allowed me to just get out there more, you know what I mean?

Chris: I mean, I got to the point where my Nikon kit was a little small but this was half the weight, and with a small pancake lens on it I could actually pocket my camera. So I had the OMD EM5. It was a nice little retro-looking camera but it had some pretty serious image quality if you used the right lenses with it. And I went from there and just figured, you know what, I’m going to try their flagship, right? Because I’ve had some of Nikons high-end cameras, and it was like, oh, I’ll give this Olympus a try. And I got the OMD EM1, or 2. It is 60 frames a second. It is crazy—it’s got 4K. And it’s pretty light; it’s a bit bigger than my own D EM5 but it’s not my D2H or my other cameras.

Chris: Anyway, so I bought some of the more expensive glass for that, like the 75mm f1.8 and wow, just some of the crystal clear shots coming out of that. It’s been a great camera for almost everything I do, even night photography and astro I’m trying to get into a bit. So I was wondering how I could get this camera system to do geotagging for me. Nikon, you can buy a little adapter for it and then it just instantly writes and takes care of the file. It’s a little clunky but, I mean, it works really well once you have it going. So with the OMD camera that I have now, there is an app that you can get on your phone called OLYMPUS Image Share, and what it does, is not only does it allow you to remote control your phone which is a pretty interesting feature, especially if you’re taking long exposures and you don’t want to touch the camera, right, and shutter and that sort of thing. But it also has the geotagging feature, so what I do is I just open the app up, hit the logging, slide it to on, throw it in my pack, throw it in my pocket, whatever, and then I start taking photos. So I’ll walk around Edmonton and just start taking some interesting photos here and there, whatever, around the river valley or some of the neighbourhoods. Then, that whole time, I’m getting GPX file information onto my phone. So when I’m done shooting, I cancel it (turn it off), and then I just connect to my OMD wirelessly through the phone, and it just sends a file over and quickly writes a sidecar file onto my OMD picture files. So then I import it into Lightroom, and I can hit the map feature on that, and I can see everywhere I’ve gone, and it’s placed every image right along there. I find it’s really neat if you’re interested in journaling and stuff like that. I plan to make more use of this when I do some travels through BC and Alberta next year. But I can imagine there is probably business applications for it too—insurance, anything where you would need to log a location as well. I think it’s going to be great the more I use it, just so I can remember: “That was a cool place. Maybe I’d like to go there around sunset, or something,” you know, and then I know exactly where I was. And it’s seamless. I mean, I know Canon has something similar—Canon Connect I think it’s called, and it’s a very simple program that again just, I guess, connects with your camera logs. It’s another interesting creative tool you can do.

Interviewer: And some bodies are coming out with GPS in them now as well.

Chris: Yeah, exactly. And, I mean, some things like especially with these little Olympus cameras, I don’t know how they jammed what they did into, so maybe putting GPS into that isn’t the greatest. But for now it’s a seamless solution. Some of those clunky kind of things that you’ll do and you’ll go “Geeze, I wish this were easier,” right, or “This isn’t intuitive,” or anything. You just turn it on, Log geotags, Done, Sync, and it does it all for you.

Chris: Yeah. I love it. I love it when technology just does what it’s supposed to do and gets out of the way and then you can do what you need to do.

Chris: Thanks for having me.