How to Engage with Your Followers 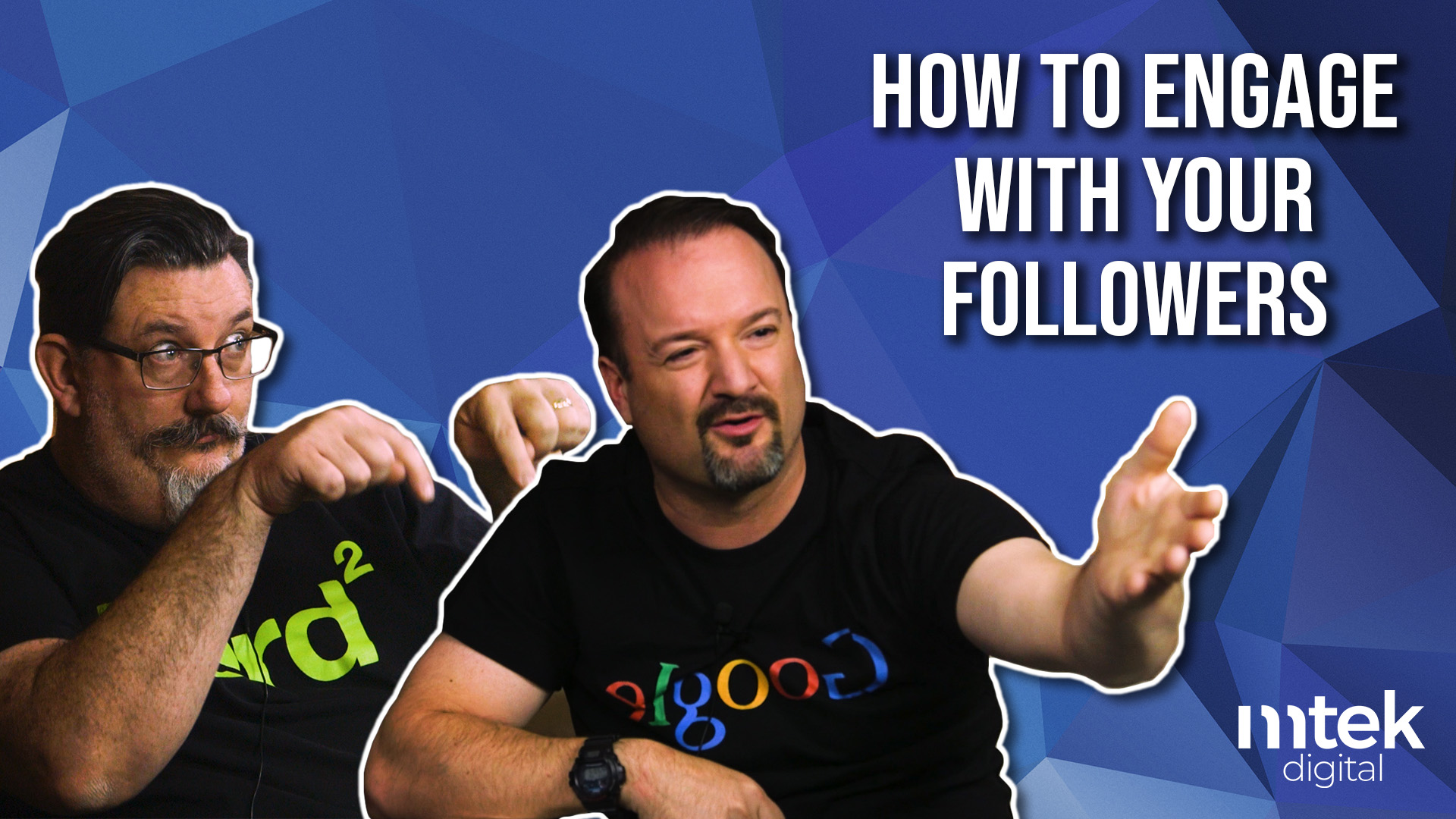 [vc_row][vc_column][vc_video link=”https://youtu.be/ntUIR8P28ic”][vc_column_text]Greg: Hey, I’m Greg from MTek Digital. Welcome to Between Two Browsers, where David and I will talk about

Greg: Stuff, tech stuff, web stuff. Online stuff, marketing stuff. And you get to enjoy the benefits of that conversation.

David:Frequently, people are coming up and they’re saying you know I posted, I’ve got five hundred followers, a thousand followers and I’m making this post, does everybody see it?

David: But people seem to think that’s the case.

David: So has LinkedIn.

Greg: So other platforms have done it too. So what’s the best way then for users to get into someone else’s stream? It’s one issue.

David: One, one of our favorite words. Engagement. So what we’ve noticed is that when you’ve like somebody else’s post, or comment on it, and they like it back, Facebook and LinkedIn seem to create a connection between the two and it says, you know what? The next time that Jack makes a post about whatever, I’m gonna show it on David’s feed.

Greg: So this is like real relationship building stuff.

Greg: So that points I think for a lot of users to spend time building those relationships.

David: 100%. So this is a lot of people there’s a notion floating around right now, we’ve heard it from like Blockmore about give your two cents. And people were getting so confused on that ’cause they thought it literally meant pennies for advertising like their paying in out of an ad spend budget.

Greg: Yeah, yeah, and the concept really was sort of put forth that way.

Greg: Specifically, he’s talking about a dollar 80 a day.

Greg: Is sorta the concept, is give your dollar 80 a day.

Greg: It only cost you a dollar 80. Because you’re only giving them your two cents the idea being if you spend 15, 20 minutes a day online commenting and posting and engaging with other people and throwing in your two cents 90 times, there’s your dollar 80 and I don’t really think the analogy works.

David: But even Gary V, Gary Vaynerchuk did a huge episode on this.

David: That’s how you grow your following, that’s how you grow your stuff because you’re gonna create a connection between people, you’re gonna get engagement and they might follow you back. They might say that’s great, let’s strike up a conversation. And at the very minimum the platforms are gonna recognize that there’s a connection between the two of you.

Greg: And that connection doesn’t have to be complicated.

Greg: I think it’s really important for people to understand that. That connection can be as simple as going hey way to go you’re nailing it. Like good job. Saw that thing you did, it was awesome, thumbs up.

David: That’s all it is.

Greg: It’s all it takes and if you can do that to the contact that you want to nurture as well as the contacts that you want to create, I think it’s a really powerful tool. So concentrate less on how much is showing up in your feed and more on who they are and what you’re hoping to get out of that relationship.

David: There’s also another interesting strategy on the same thing with the two cents where it’s I’ll follow you and you follow me back. There seems to be quite a bit of that. Like it’s almost like this reciprocity of oh well he liked my post so the next time he puts up a post, I’ll help him out too, I’ll show him some love.

Greg: Yeah, there’s interesting analytics floating around. I don’t have any that I can share in the description for the video but there’s been a lot of talk about that on Instagram. Instagram platform, you know, you look at the very big creators on Instagram with hundreds of thousands of followers, how can they possibly follow all those people back? And if so, what level of engagement are they really gonna get?

Greg: So sometimes it’s more valuable to have a small number that you’re engaging with, that you follow follow, the reciprocity game and more that you simply allow to pay attention from afar like a fly on the wall.

Greg: And that fundamental engagement is where the value is not in the big numbers.

David: No. So to summarize what we were talking about is if you make a post and you find some magical LinkedIn group that has three million people in, when you post in it, they don’t all see it. It’ll try and find and match up some people, and it might be at that moment in time when they’re swiping through their timeline and scrolling but honestly, it’s not how it works. Though you might get more impact in those larger groups because there’s more chances it might stick with somebody, you’re not going to be showing it to everybody who follows you. So thank you very much for watching. If you like anything that you’ve heard here in the episode, you wanna see more, we would love it if you would show us some love up here, down there, down below, smash that bell, smash that button, do the subscribe, the like. I don’t even know what platform you’re looking at right now, but there’s probably a button somewhere. And that would be greatly appreciated.

David: And that’s how it works.

The following is a transcript from our video at https://youtu.be/ntUIR8P28ic[/vc_column_text][/vc_column][/vc_row]