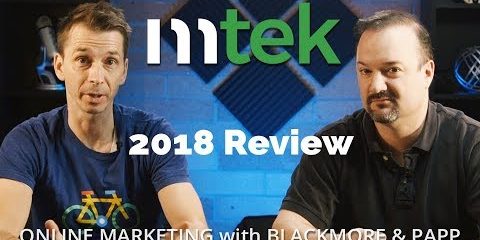 – So we thought we’d do a recap for you guys of 2018, kinda what happened online this past year.

– So where do we start Mike? I think, one topic I always like to touch on is what we’re doing right now, video.

– Yeah, video is certainly creeping into everybody’s conversation this year. It was kinda like a rumor before, now everybody is starting to take it a little more seriously and I think it’s the platforms, the platforms are really sort of upping the video–

– I think they’re embracing it.

– And I think people are coming to realize that you know, we’re all walking around with video recording devices now, and its no longer about production, it’s about the content.

– Absolutely. We’re talking of obviously on the topic of online marketing, digital marketing, using video. So in 2018, do you see, is Google taking a preference to seeing video content?

– Absolutely, as a matter of fact, they are taking it so seriously that any day now you’re going to be able to do lead gen forms right off your video pre-roll. So picture this:

– You’re watching a video on the brand new 2019 Ford Bronco, you’re loving it, and the next thing you know, this little form comes up, asks you, “Hey, would you like to book a test drive?” How convenient is that?

– Yeah, so these are some of the things that you can look forward to as a business owner as well. I mean, you don’t have to go to your website.

– Yeah, no that’s fantastic. We certainly noticed in our business, our favorite advertising platform, we’ve shifted around you know, you play with LinkedIn, Instagram, Facebook, it’s the YouTube pre-roll ads; we’re having a blast with those right now.

– Yeah I bet, eh. It surprises me actually cause I always skip the ad and when you look at the metrics–

– But it’s still brand awareness, even for the person who… and then that was a free skip.

– It’s the best five, I mean six seconds that a, that you can get for free, absolutely.

– Exactly, that’s awesome. So, if you help them they will come. This is something that you pulled up in an economic impact report here with Google.

– Yeah I think um, you know everyone has a need, or an intent you might say so, you know, if they’re out there and they’re looking for your type of business and products, I think if you’re willing to help them, they’ll come to you. And there’s many ways that you could help them. I mean, it could just be as simple as answering a question. It could be a chat interaction, they could call your business. I think, either way if you’re willing to help somebody, they’re willing to come to you.

– That’s very true. And Google is all about answering questions. I mean that’s really what it comes down to.

– Yeah you could really simplify that as to a, you have questions and you have the answers, meaning you as the customer would type in a question, and you as the business, would have the answer. So, it’s peer to peer really and a lot of times Google will serve up old listings because nobody’s actually answered the question better since 2006. And so you might run into that a little bit, unfortunately those are a little outdated.

– Yeah, yeah, so anything else coming up in the, there we go, some juicy little ones, in fact we said–

– Yeah you know what, actually, one of the things that were really, I think, game changing, for 2018 was Google duplex.

– That is phenomenal. You may have seen it on the Google marketing platform announcement back in May, but essentially all it is, is it’s actually going to make calls for you to businesses to book like, hotels, restaurants, and it’s creepy good, okay. And you have a Pixel three phone, I just picked one up, it actually now has a feature, when people call you, that you can actually send it, you now the old block system, you can actually, check this out, get the persons first two sentences read to you without answering the call. So it pops up like a text message.

– So it’s like screening your own calls and there’s actually a voice that answers your call and the person starts talking, and then they send you a transcript to see if you want to take the call. It’s beyond creepy. And I think that’s one of the big big changes this year that’s really going to help businesses out.

– Well on that note, the way they’re achieving that of course is though AI and we’re hearing the notion of chat box that are coming online quite big now. Are you seeing that a lot with your clients?

– Yeah, you know, wasn’t nine months ago I was watching transcripts and people are getting freaked out. The minute they see that it was a bot, they’re like what is this, this isn’t helping me. And so I think they were scared. I mean essentially what a bot is is a tree map of conditions right, so I think if you do it right, I mean, you can really get people directly to the part you know if you’re a service center or a call center, a chat bot would be extremely helpful, kinda leading the witness.

– Except the next evolution I’m seeing especially out in Asia right now with the bots is the use of AI. They’re actually not just following a set of logical scripts they’re actually making intelligent answers based on the context of the question and looking at its bank of information it has from before. That’s where its getting scary. Some people say they can’t even tell the difference.

– You’re right, so IBM Watson comes to mind, it doesn’t look for an answer actually it’s quantum computing. So its able to deliver like manuals back in real time where a human would actually have to go and source that. Yeah you’re absolutely right. It was an interesting year to say the least. This one is really interesting, if you run a Google AdWords campaign you may see a column now that says, store visits. So people just aren’t filling out forms on websites like they used to. It’s definitely been declining over the last four years especially. And people are more likely to call you now because they go to the chat window, they don’t get the answer, they can’t find it on your website, so like ah I’m just going to call, right. So you see that happening and you might think that your marketing’s not working.

– But there’s another aspect to this, how many people actually came to your brick and mortar after seeing your ad?

– Well this year Google announced in-store visits. And how they do that is they ping off the Google My Business listings and the cell towers. There’s four actual ways, that they know your at that business. So then you might say, hey, actually this is driving people directly to my store not to my website converting. Which gives you the whole picture right, and I think you’d want that.

– There’s a lot of stuff a lot of material that comes with online marketing. The biggest problem actually that we have noticed, Mike and I were commenting about this is that, people are feeling that there’s such a gap occurring from where their current knowledge is and what’s occurring in the industry that they’re actually too afraid to even ask the basic questions anymore. They don’t even want to admit that they don’t know.

– And its just going to continue to create a bigger gap. Yeah, I think you know, we can help that, you know you guys said you’re doing a lot of service educating the clients, and I think that will pay dividends for you as well.

– Thank you very much for watching make sure you go and take a look at all the other content that we’re dripping out on a regular basis. You can smash the notification bell down here and make sure you subscribe over there or wherever the button happens to be on the screen. You could leave some comments depending on what platform you’re on. We do monitor that stuff and probably create another segment or piece just for you.[/vc_column_text][/vc_column][/vc_row]