Blackmore on Simple search and SEO improvements for Voice 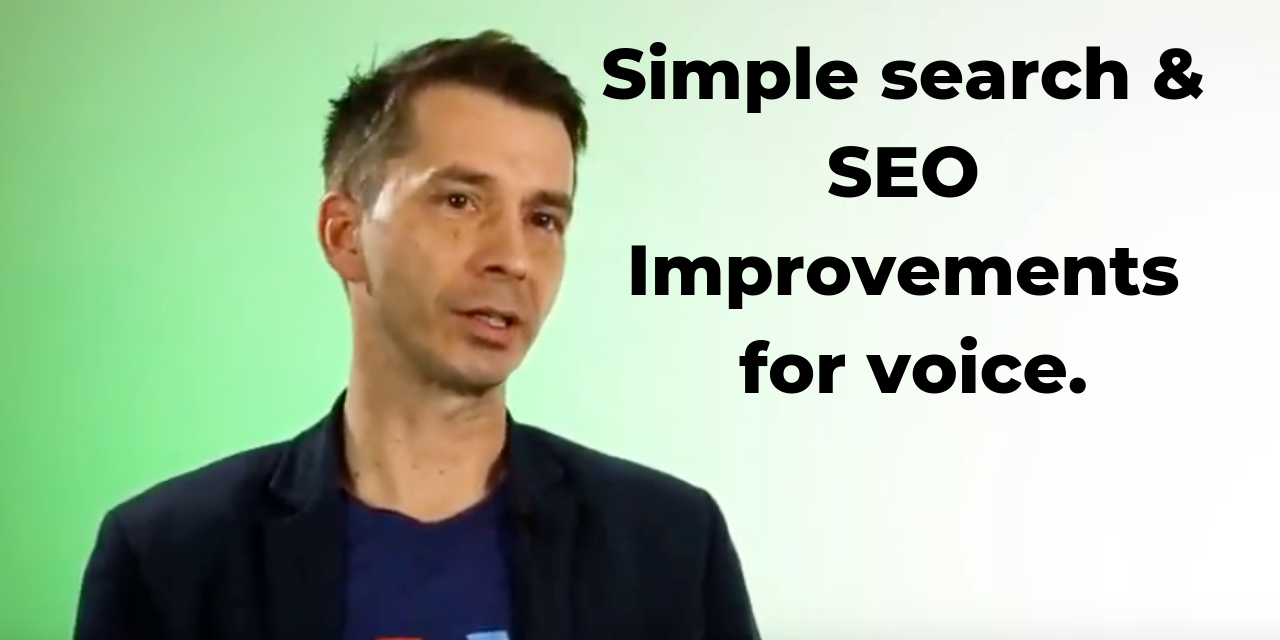 [vc_row][vc_column width=”1/2″][vc_column_text]Backlinks still do play a role in voice believe it or not. It’s just not as prominent as a local or a traditional SEO.

– Voice, I think you have to really think about what would you ask something, and that you wanna have that exact, the way you asked it, on your page. It sounds simple, but do it. That’s the hard part for everybody, I notice. We talk to people all day, all week about these strategies. I come back a month later and they’re like “Oh yeah, we’re gonna do that this weekend but uh….” So they don’t get around to doing it a lot of times. I get asked a lot when I do speeches, I did a Facebook this year. It was for the automotive industry and it was pretty intimidating, you know. I don’t know these people in Toronto, it’s a bigger market. They asked me, a couple of students came up to me at intermission, they’re like “Mike, why are you telling us your secrets, what you’re doing?” My answer was simple. I just said “Cos you’re not gonna do it.” It’s as simple as that too. I think lots of people have good ideas but they don’t execute on them. If you think about your website traffic now, it’s probably one of the number one ways you’re growing or doing business now, besides your social.

The floor traffic coming in, it’s much easier for people to interact with you and find you on the web. So you should be playing this game. I say game because it does change. It’s a moving goalpost. So just as you line up your field goal and you think you got one they did an update and so now you’ve gotta readjust. And that’s what this is, and it’ll always be that way. You can count on that. It’s a changing, evolving product. I honestly believe within 10 years people won’t be going to your websites. I think everything’s gonna happen right there. On the page of Google or on the voice… I don’t think it’s gonna be…

You’re getting video answers now pushed to your feeds. Where I’ve seen Gary Vee answering video stuff. It says Google Search Video cos he answered a question. You’re gonna see more and more of these search engines actually not driving traffic to your website. That’s probably been one of the biggest complaints about position zero. As good as and cool as that is to be there, people don’t need to click through. Cos everything’s right there, right? So they’re like “Oh, okay. Got my answer.” and so they don’t go to your website. There’s a danger in that as well. I don’t think Google has that figured out yet. They’re aware of it but I don’t know what they would do to counter that. As long as they keep changing things I think it’s your job, as business owner. More and more, agencies are good. They are good to deal with. Because they’re in the trenches. They’re staying up to date on best practices. But I think as a business owner you should be as well, so you can keep them honest and make sure you understand what the work that they are doing for you. Because it’s super confusing. It’s like another language. I mean, if I’m good at HVAC and heating, I made my bread and butter off this business.

My forte is fixing your pipes and your furnace, it’s not ranking on Google or marketing probably primarily. So they always lean on somebody. But now you can’t do that. I feel like you have to be just as smart or savvy as the people that you’re paying to do the work. It’s really important. And it’s gonna get more and more important. There’s so much wasted money out there. I attribute that to the small business, big business owners. They don’t know how to keep it honest. They don’t know how to ask those questions. They don’t even understand where they’re wasting the money half the time. Unfortunately, I’ve seen it too many times, where agencies are feeding you a monthly report that shows KPIs and metrics that may be favorable to keeping a check going. As opposed to what’s my actual business objective and are we hitting them. I think that if you’re a small business owner out there the time of putting your head in the sand is over. You really need to get up and take control of your data. Data’s gonna be, in five years… I keep saying five years. It might be sooner but data now, we’re making data driven decisions in marketing. You guys probably are as well. And if you’re not, you should be because gut feelings and projections and things like that are kinda, you don’t need to. You have the tools and resources now to make those decisions. There’s so many free courses out there.

I mean, if you’re a business owner you’re probably thinking “Where do I start?”, “This is daunting.”, “I’m so far behind, what’s the point?” In fact, it’s just…. It’s actually, you’re at the crossroads right now, where I do believe if you don’t do something you will be so far behind that it will be hard to catch up. But I think if you got in now and you dug your feet in and you start just asking the questions like “What am I spending and what am I getting?” Start there. Have a look at it and are ya happy? We deal with clients all the time that, they don’t understand what they want. They say “Well, what are they doing?”, or “What’s my competitor doing?”, or “How did they do this?” A lot of times they don’t even have what they want, or they’re not clear about it. That’s dangerous.

So I think that comes back from the whole, you need to get educated on what’s out there, what’s being used, and what your consumers are using. I think more importantly you may not need to be on LinkedIn, Twitter, Instgram, Facebook if your clients are never there or that’s not how you are getting business. If you don’t even understand that at a basic level, how could you possibly improve your business or grow it? You know, I think that’s the age old adage is you can’t grow what you can’t measure. Nobody knows your business better than you. Now is the time to take some action, get in front of your data, get in front of your tools. Get your agency, bring em in for a meeting. Find out what’s going on. It’s 2019 in a month, less than a month. Don’t put this off any longer. What you don’t do today you’re gonna wish you did in one year from now. I highly encourage you guys to get out in front of your business and make something happen this year.[/vc_column_text][/vc_column][vc_column width=”1/2″][vc_video link=”https://www.youtube.com/watch?v=0_hRExeshQk&feature=youtu.be”][/vc_column][/vc_row]