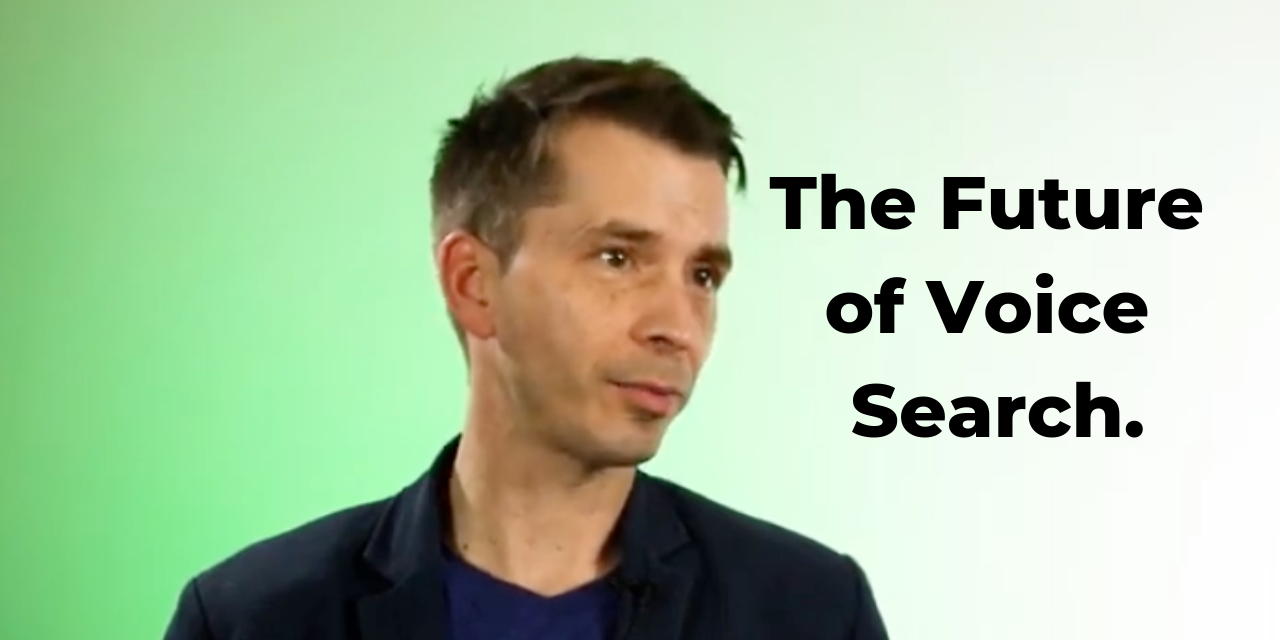 [vc_row][vc_column][vc_video link=”https://www.youtube.com/watch?v=RllXcqIAsjM&feature=youtu.be”][vc_column_text]Voice search, if you don’t know, you may have heard of these little assistants, Google, Amazon, Echo. You’ve got Alexa, you’ve got Siri. You’ve got a few software programs out there that people, yeah, that people are starting to use a lot more, especially my five year old son.

You know, it’s funny, our generation, like I’m in, you know, the upper echelon of age now, and we’re probably not as comfortable pulling out our phone in public and just being like, okay Google, or hey Siri, you don’t want to look like that person in the mall. It’s not that convenient, either. So you’re probably still going to type. However, if you’re like my kids, you’re not going to type. If you even think about it from how many words per minute can you speak as opposed to how many words per minute you’re going to type, it’s not even close. And to use an analogy, like being in the shower and you need more toothpaste, you can easily summon an assistant and have it ordered on Amazon as opposed to drying your hand off and fumbling with your phone, and you know, I don’t know how many people are in the shower ordering toothpaste, but just as an example, right? So, I think the convenience of it will lead more and more people to it.

More and more devices in the last two years are coming standard out of the box with them. Everywhere you look, they’re really trying to push people to use them. I just don’t think the adoption’s quite there yet. But having said that, 40% of adults in North America are currently using some sort of form of voice; in their home, in their car, on their mobile device. And 55% of teenagers are doing it, so you can see the disparity there. And those teenagers are going to be adults soon, so they’re going to usher this in, and that’s where it’s going to get real interesting, I believe, in the next five years. I mean, lots of people are saying 2020. But I think up in Canada we’ve always been a little bit slower to adopt to those technologies. So, I would say in the next five years, you are going to see more than half of everybody’s searches will be coming from some sort of voice. So, you want to get ready for it. And how do you do those things, right?

It’s a little bit of a black box kind of thing right now, it’s like, hear about this voice search, and I’m not sure how I could get my website to be the website that the assistant delivers. So, a few things that you can do that will control your site is claiming your Google My Business listing, is probably one of the first places you wanna start. So if you haven’t already done that, you wanna do that, like, right now. You wanna go claim your Google Business listing. And then you wanna build it out, so that your location, where you serve, everything’s optimized for where you’re trying to get business out of. Makes sense, right?

I mean, if you’re trying to sell hot tubs in Edmonton, you’d probably wanna have some mention of Edmonton, or near me, or a few of those searches on your website as well to help support that. So, outside of Google My Business listing, which, would an entire whole video on how to optimize it, I’m just gonna kinda run over like, five primary things that you’d wanna do to get voice SEO. So, Google My Business listing, the second thing you wanna do is rich snippets. So if you’re familiar with those, those are the answer boxes that you see on Google. We’re calling this Position V. It’s actually a term, deemed by Google. You’ll hear more and more of it. You’ve heard of Position Zero, it’s the answer box. Position V is gonna be the position, there’s only one on a, when it reads back the result, it’s voice. So, Position V will stand for voice. And, there’s one winner. It’s not like Google’s gonna say hey, here’s a list of 10 pages that returned with your results. They’re just gonna give you back one. So if you think about that, that’s gonna be super lucrative. And I think as far as getting back one result, you’d always wanna be that one, right?

So there’s a simple way you can do it, it sounds simple, but you just gotta do it. And one of those things are is marking up your website. And when I say marking up, there’s tools out there, it’s called rich snippet tools, rich snippet editors. You can test your site to see where you’re currently at. For questions, there’s a piece of software that you can go to and type in your business, so if you’re doing video production, like you are, you’d type that in and answer the public will deliver you back all the different ways that people would ask questions about your business.

Actually, they’re going to deliver back how people currently already are answering questions. So if you think of that, you could take that whole list of questions, and you can answer them on a FAQ on your own website. And I would test it, I constantly test it, I pull up my Google Assistant, and I’ll ask questions about my clients like, hey, Dodge dealer near me? It’s not me yet, so I’m like, hey who is that? And then I will go and search reverse, how are they, oh they just answered that question better, it’s better marked up on their site, and so those are the two really big things that you really wanna start with today. Even if it’s not adopted today, you gotta think about tomorrow, and what you do today you’ll wish you did a year from now. And that’s probably the best way I can put that one.[/vc_column_text][/vc_column][/vc_row]